There is No Room for Admirers. 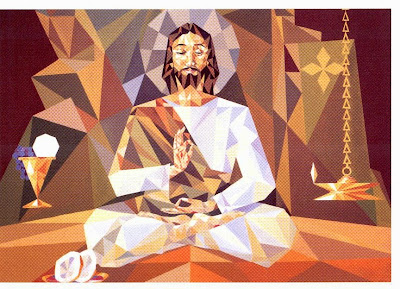 "Of all the children born to women, there has never been anyone greater than John the Baptist; yet the least in the Kingdom of Heaven is greater than he." - Matthew 11:11


Conversion or the rebirth experience (metanoia) marks the resurrection of our True Self, which is of the Kingdom and not born of woman, so to speak. Metanoia is a renewal of one's mind and motivations. It is an experience that re-orients our entire being because it relocates the point or center from which we live our life, moving it from the head down into the heart.

In the Gospels, the Christ image is made manifest in Jesus of Nazareth. Through Jesus's life and actions the indwelling presence of God is born into the world. But the life of Christ does not end with the crucifixion of Jesus. Christ is resurrected. In fact, Christ is Resurrection. This unending Resurrection is the story of Christianity. It is the True Self or the Resurrected Christ that, in Galatians, Paul says has replaced his false-self.

Paul further elaborates on this point in Ephesians where he writes, "Put off your old self, which belongs to your former manner of life, and be renewed in the spirit of your minds, putting on the new self, created after the likeness of God." This false-self/ True Self, former life/ New Life dichotomy is common in spiritual literature. In Alcoholics Anonymous members celebrate "sobriety birthdays." The sobriety birthday is often more significant than their biological birthday because it marks the point at which they adopted a new manner of living. The sobriety birthday is in fact a re-birth day. It is a celebration of the True Self, which obviously was not born of a woman or brought about by reproductive means, but by a spiritual death and resurrection.

In the opening quotation, Jesus also says "the least in the Kingdom" which denotes a spectrum of realization (least to greatest). This spectrum recognizes both maturity and depth of insight into the Kingdom, ranging from the admission of powerlessness found in Alcoholics Anonymous to the realization of Oneness with God proclaimed by Jesus in the Gospel of John.

But either way, he who is of the Kingdom is greater than he who is of the world because Kingdom dwellers, so to speak, strive to live in accordance with their True Nature and not the law or the prescribed guidelines of religious and social institutions. In fact, the prescribed guidelines of churches and governments are legitimized only in so far as they relate back to the inclinations of human nature and aid individuals in their quest to realize or embody that nature for themselves.

Often, institutions fail to do this because they are more concerned with perpetuating their power, which is why people like Jesus, Gandhi, and King are seen as subversive by those institutions. They embody the principle freedom of the Kingdom, not the ways of the world.

Many Americans believe America is a Christian nation. The majority of Americans may self-describe as Christian, but it is becoming increasingly clear that the spiritual principles outlined in the Gospels—the principles Jesus embodied and Christians are called to follow—are repugnant to many American "Christians," especially those that frequently say America is a Christian nation. It is obvious from the Gospel account that Jesus offered a counterculture and because of this he was seen as a troublemaker. And he was. But he also still is. He causes trouble for anyone that claims to follow him because the path he outlines is not an easy path to walk.

Richard Rohr wrote in Jesus' Plan for a New World, "We keep worshiping the messenger, keeping Jesus up on statues and images, so we can avoid what he said. It's the best smokescreen in the world! We just keep saying, 'We love Jesus.' The more we talk about Jesus, the less we'll do what he said. That's the way the ego fools itself. And in this case, it's the way culture, nations and even churches have fooled themselves."

We worship the messenger but ignore the message. In the process, Jesus obtains admirers but not followers. We have confused our ego with the Christ image depicted in the Gospels, and tragically with the image of God that lives within us. This is spiritual materialism. 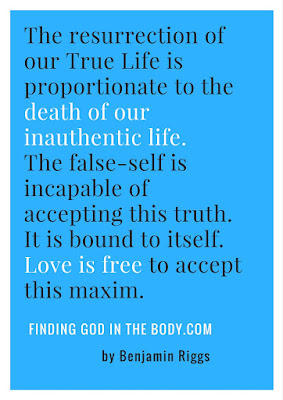 The Christ image is subversive. It undermines our ego and all of its attendant fears, prejudices, resentments, and defense mechanisms. This is a challenge. It requires that we empty ourselves. Letting go of the false-self and it's strategies takes the burden off of the True Self. It shifts the burden over to the false-self. This burden is the cross upon which the ego is crucified. And the resurrection of our True Life is proportionate to the death of our false-self. "He and I cannot dwell together in the same space." Without death there can be no rebirth. "We cannot welcome the presence," writes Rohr, "the Parousia, the full coming of Christ until we've let go of the old."

Beyond the noise, the chaos, the stress, fear, and anger we can feel our heart beating, calling out to us, pleading with us to let go of our false-self and to return to the life of the body. This is the call of Christ, which lives within us as the image of God, our True Self. Jesus shows the way. And only those that follow can be called Christian in any meaningful sense of the word, regardless of what beliefs they affirm. On the path Jesus outlined there is simply no room for admirers.

Order Finding God in the Body: A Spiritual Path for the Modern West by Benjamin Riggs today. Available in Paperback and Kindle on Amazon.
Posted by Unknown