A Guide to Arguing the Second Amendment 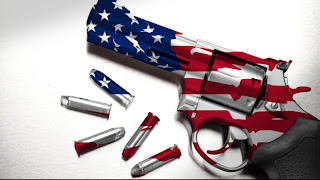 There can be no inalienable right to a gun because the vast majority of earth's inhabitants predate the existence of firearms by thousands of years. The inalienable right is to defend one's life and property, and to this end, assault rifles and high capacity clips are not required.

The Second Amendment is not explicitly about defending oneself against a tyrannical government, as many gun advocates argue. This is an element of the Second Amendment, but an element that is no longer relevant. It has expired. It's not that our government is now incapable of becoming tyrannical, but because the capacities of the military so far exceed those of the citizenry, it's a moot point. If you plan to take on a drone, F-22, or Abrams tank with an AR-15, you will need "thoughts and prayers." The National Guard satisfies this demand of the Second Amendment.

When the Constitution and the Bill of Rights were written we did not have a standing army. Enter the Second Amendment: "A well regulated Militia, being necessary to the security of a free State, the right of the people to keep and bear Arms, shall not be infringed." National security is the import of the Second Amendment. We needed a militia, or a military raised from our citizenry, in order to defend ourselves against foreign invaders. Now that we have a standing army, we no longer need a citizen militia, and therefore this facet of the Second Amendment is also outdated.

Access to (most) shotguns and handguns is guaranteed by the second amendment because both are common and effective means of self-defense. The AR-15 is not. It is an assault weapon, which means it is inherently offensive.

The AR-15 was not designed for self-defense. Of course, it can be used to defend, but so can a shovel or an RPG, though neither are ideal. Likewise,  when defending oneself against a home invader or a carjacker, for example, the AR-15 is far less effective and therefore not commonly employed. For this reason, access to the AR-15 is not required for the government to guarantee its citizens Second Amendment rights. Handguns and shotguns monopolize self-defense because they are more effective instruments of self-defense.

Moreover, the government is well within their purview to regulate exceedingly dangerous weapons not commonly employed for lawful purposes, i.e. self-defense. The Ar-15's higher fire rate and shorter reload time (along with its machismo aura) make it a favorite of sociopaths who want to terrorize people, and therefore exceedingly dangerous with little-to-no redemptive self-defense value.

An assault weapons ban would, in my opinion, help to deter certain types of mass shootings, but would do little to curb gun violence in general. AR-15's are the weapon of choice in large-scale mass shooting that occur in highly populated areas like schools and movie theaters, but in run of the mill mass shootings (4+ victims) handguns out pace rifles two to one, and in standard gun deaths, it is not even close. And since handguns are a common and effective means of self-defense, they are protected by the Second Amendment (D.C. vs Heller) Therefore, the conversation regarding gun violence must include an assault weapons ban, but it cannot stop there.

Since handguns account for the vast majority of gun deaths, but are protected by the Second Amendment, measures other than bans must be considered. Congress should close private sell loopholes, expand background checks, include mental health components, impose waiting periods, and mandate gun safety classes for all prospective buyers.

I think the brightest glimmer of hope on the horizon is smart gun technology. If they are an effective means of self defense, but notably safer, the government may be able to ban all non-smart weapons and remain within the bounds of the Second Amendment. Smart weapons prevent accidental discharges and nullify unlawful transfers and theft, not to mention the conceivable advantages that are inevitable as the industry develops.

Additionally, taking steps to secure our schools would go a long way to preventing horrors like Sandy Hook and Parkland. Schools are soft targets that enable sociopaths to inflict the greatest amount of harm on society with the least amount of resistance. Make it more difficult for these people to get on campuses by installing card-key activated turnstiles, and designing single points of campus entry manned by guards, much like in gated communities and large factories. It is also hard to argue against the presence of armed police officers on campuses at all times, with their cars parked out front as a physical deterrent.

Finally, I'd suggest the media quit publishing the faces and names of shooters. Publish age, gender, race, and any other detail relevant, but not identifiers that grant them the infamy they crave. The First Amendment grants the press nearly illimitable freedom, so this is not a measure that can be legislated. The public must enforce this by choosing to read and share articles that abstain from publishing names and photos.

Nearly all of these measures enjoy historically high support, according to the latest Quinnipiac University National Poll: 66-31% are for stricter gun laws; 67-29% support a ban on the sale of assault weapons; 83 -14% want mandatory waiting periods for all gun purchases. At this moment, there it is possible to effect change. We shouldn't squander this opportunity running down rabbit holes the Supreme Court has already deemed unconstitutional.

We live in a country of laws and the Second Amendment is one of those laws. We cannot argue for repealing the Second Amendment. This is a straw man that plays right into the NRA's strategy. Banning assault weapons, high capacity magazines, and expanding background checks, as well as taking action to secure schools at state and local levels are all practical and effective steps to ending this epidemic.
Posted by Unknown