The Confession of Kalu Rinpoche: Revelations of Sexual Abuse in Tibetan Buddhism. 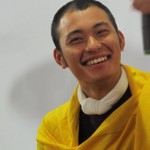 A Review of The Sex Lives of Monks: Confessions of Kalu Rinpoche by Shyam Dodge

"Kalu Rinpoche, a 21-year-old young man, is considered to be the divine reincarnation of Kyabje Kalu Rinpoche. The official website for the lineage declares Kalu to be the “The Supreme reincarnation of our spiritual master” and someone who’s mere gaze can inspire equanimity, even ecstasy. Troubling pronouncements when viewed in light of revelations from Kalu’s personal and confessional video on November 28th of this year.


Kalu, himself, posted a video where he frankly and bravely tells the true story behind his spiritual myth. It is a story of molestation by Tibetan monks, murder attempts, and drug abuse. It is not a comforting tale. And it clarifies the endemic problems of any system that relies upon denial of the senses in favor of supernatural realities.”

I decided to share this article with my readers before having read it in its entirety. I only read the first few paragraphs and watched the video This was irresponsible and I apologize. I did so because it raised some important questions, in my mind, about dharma transmission and the authority of the institutional lineage and how all of this relates to the development of Buddhism in the west.

Now having read it, I feel like Shyam's article used this unfortunate situation as an opportunity to attack an ancient practice tradition. He seems to be suggesting that there is a common thread of dehumanization intrinsic in all forms of mysticism—Christian, Buddhist, and Hindu—that is to blame for such terrible circumstances. This, I do not agree with.

I believe that the Hindu, Buddhist, and Christian practice traditions all venerate the body and the practices point towards complete and total embodiment. I have been very clear about this in the past (click here to read my most comprehensive explanation of the role of the body in Buddhist spirituality). I believe that Kalu Rinpoche's courage is a testament to this statement. This is not an attempt to rationalize or defend "the system" that perpetrated these terrible acts against Kalu Rinpoche. It is an observation. Kalu Rinpoche was not attacked by a philosophy or system of practice. To suggest otherwise is speculation.

It is true that the tulku tradition demands of people, like Kalu Rinpoche, "perfection." But perfection is not always defined in an inhumane or idealistic way. Perfection (paramita) maybe defined, as is often the case in Mahayana Buddhism, as wholeness or completeness—fully human. There are two recent tulku’s that come to mind, who fully embodied this sort of perfection: Chogyam Trungpa Rinpoche and Dilgo Khyentse Rinpoche. So, the tulku system is not impotent. It is vibrant and very helpful.

I chose to share this article about the sexual abuse Kalu Rinpoche suffered at the hands of monks he trusted, because I think it is very important to address the limitations of institutionalized authority.

There are some very important questions raised by Kalu Rinpoche's video. He said that he was sexually abused for the first time soon after his father's death, which happened when he was nine...I believe he is now twenty-one? That is twelve years. Why was this kept silent for so long? The answer is obvious. When the illusion of perfection is seen as a necessary ingredient for the survival of a person or an institution, then all imperfections will be swept under the rug.

There are limitations in any system, and entertaining romantic ideals while ignoring the reality of the situation is not healthy. On this, you have no argument from me. I have often said that these limitations are ignored in religious institutions because to have limitations means that the system is not all encompassing, which challenges the monopoly on enlightenment or salvation and therefore power, which Kalu Rinpoche alluded to in the video.

However, I do not believe that the image of perfection is actually an indispensable ingredient in the continuation of the teachings or the lineage. Kalu Rinpoche and all other genuine teachers represent more than an institution. They represent humanity.

So, while some may lose sight of what they represent it is does not suggest that the entire system is flawed. That is like throwing the baby out with the bath water!
Obviously, "the system" is not "perfect," but that doesn't mean it is not useful. There are tons of people who are a product of this system and have worked tirelessly to make this world a better place. It has some limitations and those involved would do well to accept those limitations, but limitations do not equal impotence. Kalu Rinpoche's confessions are a step in the right direction and a remarkable sign of courage and wisdom. Lets embrace and work with our imperfections instead of sweeping them under the rug and pretending to be something we are not. Rinpoche serves as a remarkable example of just how to do this.


With that said, you may: